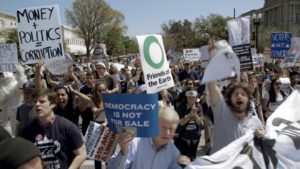 The Woods Hole Library will be screening its next documentary film, Dark Money, on Monday, October 29, and Wednesday, October 31. The Monday performance will begin at 7:30 PM; the Wednesday show will start at 1 PM. This event is a collaboration with POV, PBS’s award-winning nonfiction film series, www.pbs.org/pov.
Dark Money, a political thriller, examines one of the greatest present threats to American democracy: the influence of untraceable corporate money on our elections and elected officials. The film takes viewers to Montana—a frontline in the fight to preserve fair elections nationwide—to follow an intrepid local journalist working to expose the real-life impacts of the U.S. Supreme Court’s Citizens United decision. Through this gripping story, Dark Money uncovers the shocking and vital truth of how American elections are bought and sold. An official Selection at the 2018 Sundance Film Festival, Dark Money was directed and produced by Kimberly Reed, whose work has been featured on The Oprah Winfrey Show, CNN, NPR, The Moth and in Details magazine. Speaking on her inspiration for making this film, Ms. Reed says, “Money in politics has never been more crucial or timely. Dark money contributions increased a stunning 60-fold in 2012 (the first election after Citizens United) and spending on 2018 campaigns has already far surpassed that of 2016 campaigns. I am excited that this film is premiering in the midst of the 2018 election cycle. I believe campaign spending is the most fundamental political issue of our time, and the film comes at a time when solving it is critical. I hope Dark Money will educate and inspire people to demand reform.”
The film runs 85 minutes and is free and open to the public.