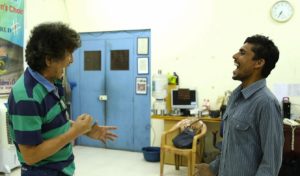 The Woods Hole Library will be screening its next documentary film, Singing with Angry Bird, on Monday, November 26, and Wednesday, November 28. The Monday performance will begin at 7:30 PM; the Wednesday show will start at 1 PM. This event is a collaboration with POV, PBS’s award-winning nonfiction film series, www.pbs.org/pov.

Jae-Chang Kim runs a children’s choir in Pune, India. Although his quick temper earned him the nickname “Angry Bird,” he has made significant changes in the lives of the choir children. But skeptical of the practical value of music education, their parents are reluctant to let them sing. In order to convince them, Angry Bird decides to train the parents with their children for a joint concert, showing them the power of music in bringing families closer together.

This film runs for 60 minutes and is free and open to the public.