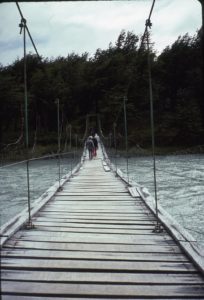 Craig Dickson, who has retired from a career serving aboard oceanographic vessels, will present a program titled “Travels at Sea.” He will talk about his time and show many of his fine photographs. This talk, unlike his previous ones, will be mainly about the places the ships sailed and their ports-of-call. After consulting all the log books of the trips he was on, Mr. Dickson calculates that in his 34-year career, he set off on 407 cruises of varying lengths, from a few hours to 48 days. The WHOI vessels he sailed aboard are on the Atlantis II, Lulu, Oceanus, and the Knorr, as an officer on all except the LuLu. Mr. Dickson says “The last talk was of the boats, this is where the boats went, of the people you meet there.”

In order to further narrow his focus for this travelogue of his career, he will show photographs mostly from ports on the Pacific: the Panama Canal, the Galapagos, Patagonia, Easter Island, Tahiti, Guam & Saipan, Tokyo and the Gulf of California. If time allows, he will also show photographs of the west coast of Central America: Mexico, Guatemala & Costa Rica. He might possibly find time to show photographs of the Arctic and Antarctic, though he promises to return to the Library for another talk if he runs out of time on this evening. Most of the pictures will be of the ports the ships visited, as well as some pictures of the ships as they worked on station in the open sea.

This event is free and open to the public; entrance will be at the lower level which is handicapped accessible.