Hill Walking in Scotland’s Cairngorm National Park: A Woman, A Cottage, An Inspiring Book and a Dream Realized in One of The World’s Most Seductive Wild Places

An Illustrated Talk by Pamela Rothstein

Last summer, after years of dreaming, months of reading and weeks of viewing images of Scottish mountains and wild locations, Pamela decided that a solo trip to Scotland was just what she needed. Have you ever dreamed of an extended walk or hike? Have you considered going on your own? And have you ever stumbled on a rabbit hole leading to fascinating literary gems about your destination? With photos and narrative, Pamela will tell of of planning her trip, locating her cottage in the high-walkable Caringorm town of Kingussie (don’t even think of pronouncing that hard “g”), and discovering the mesmerizing masterpiece of nature writing, Scottish author Nan Shepherd’s “The Living Mountain,” one woman’s poetic meditations on her journeys into the Cairngorm mountains written during World War II.

Scotland is at once breathtakingly beautiful and startlingly harsh. And in the pantheon of Scottish mountains and magnificent natural sites, the Cairngorms are unique – the highest, coldest and snowiest plateau in Britain. Five of the United Kingdom’s six highest mountains lie inside the park, alongside 55 Munros – mountains over 3,000 ft – which can be found here too. There you encounter a diverse terrain with huge forests of ancient native trees (Caledonian forests), cascading waterfalls, lochs, rivers like the Spey, where Pamela was based, and fields and rolling hills of blooming heather. , and abundant wildlife such as the osprey, golden eagle, ptarmigan. capercaillie and wildcat. The Cairngorms is one of the best places in the UK to see wildlife, with 25% of the United Kingdom’s threatened species.

With local trails, extensive, well-marked walking paths (ways), mountain huts (bothys) and public access laws that enable free roaming, the Cairngorms are a walker and hiker’s paradise. And it turns out that the Cairngorms are now famous for something other than their natural rugged beauty and forbidding weather – they are where the television series Outlander was filmed.

Come hear about Pamela’s explorations on foot from her cottage base, her forays into the hills and forests, through nature preserves and by free-roaming sheep, past the ruins of the Ruthven Barracks (built by George II’s government in the early 1700s after the failed Jacobite uprising of 1715 to maintain law and order and enforce the Disarming Act of 1716)) and about her two ventures into organized activites – at the Highland Folk Museum (akin to Plimoth Plantation) and the wee Speyside Distillery .There’s not sufficient whiskey to share, but Pamela will prepare that other classic, oatcakes, after which Scotland is called “the land of cakes.” 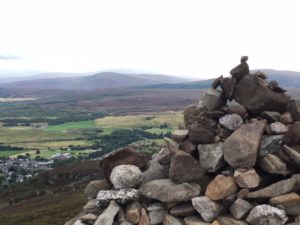