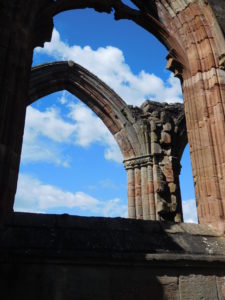 One of the casualties of the frequent and bloody clashes in the Border Wars were the many substantial abbeys, now seen in magnificent ruin dotted across the countryside. Photo by Betsy Gladfelter.

Inveterate traveler Betsy Gladfelter, who recently hiked through the Scottish Borders will present “Borders Abbeys Way: wandering Scottish-English battle grounds from the 1100s.”   She back-packed along the Way, a circuit route of 68 miles. The path connects 4 magnificent ancient ruined abbeys: Jedburgh, Kelso, Melrose, and Dryburgh. They were mostly built during the twelfth century and destroyed by marauding Englishmen in the Border Wars in the 13th and 14th centuries. The Way also goes through the towns of Selkirk and Hawick. As she traveled the route, Betsy stayed in small towns where the evenings were spent in Bed & Breakfasts. She had plenty of time for meeting and talking with the locals, but most of the walk was spent in splendid solitude on trails through upland and lowland pastures, forests, and along some of the most famous trout and salmon streams in the UK.  The area is also famous for its many textile mills, with, as Betsy says “the raw product surely supplied by the many sheep on the hillsides.” She added that Scottish weather didn’t disappoint, with both sun and rain in abundance.

Betsy will include all these details and more in stories of the Way, including hearing a brass bandpass beneath her bedroom window (located in a converted bank building) at 9:30 at night. She rushed to look out and saw hundreds of horseman parading by. She soon discovered that this was a “Rideout,” an essence of the Borderlands when folks return to their rural home from all around the world to commemorate the 13th & 14th-century battles with England. She found the landscape tranquil except for the rideouts noisily encircling the perimeter of each town and celebrated by each town in sequential weeks in the summer.

This event is free. All are welcome. Entrance will be through the Library’s lower entrance, which is easily handicapped accessible. For more information, either call the Library at 508-548-8961.