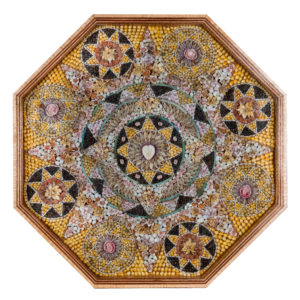 Cape Cod native and Sailor’s Valentine award winning artist, Gregg Roberts, will speak at the Woods Hole Public Library at 7:30 PM on Wednesday, July 18. He is a singer, poet and self-taught artisan and resides, teaches and maintains a studio in the seaside village of Cotuit. The studio includes an immense collection of shells and nautical memorabilia used in the creation of his distinctive works, serves as a gallery of Gregg’s existing Sailor’s Valentines, and houses his instructional classes.

Gregg created his first Sailor’s Valentine in 1984 following an inspirational recollection of seeing a Sailor’s Valentine on a childhood trip to the maritime museum at the Mystic Seaport in Connecticut.  From the beginning, his distinctive artistry became apparent as Gregg incorporated his knowledge of knot tying into the traditional shell- based style of Barbados.

Recognition of his talent followed quickly as Gregg participated in the Sanibel Shell Show, the oldest and most prestigious shell-craft competition. He won prizes there in the professional sailor’s valentine and jewelry categories. He also has been recognized as one of the country’s most prominent Sailor’s Valentine artists by Grace L. Madeira in her book, Sailors’ Valentines…Their Journey Through Time in which six of his pieces are featured.

Examples of Gregg Roberts’ Sailor’s Valentines can be found at the Cultural Center of Cape Cod where Gregg lectures and holds classes for novice artisans and at Roger Williams University in Bristol, RI.  The commissioned Sailor’s Valentine, “The Bristol Piece”, hangs in the University’s Global Heritage Hall and is believed to be the world’s largest Sailor’s Valentines measuring 48 inches in diameter.

All are invited to this free illustrated talk. A concurrent exhibit of his Sailors’ Valentines is on view upstairs in the Library.