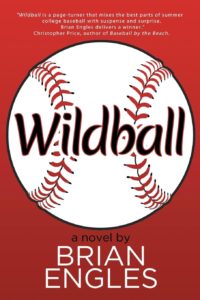 On Monday August 13, at 7:30 PM Brian Engles, will speak at the Woods Hole Public Library about his new novel Wildball. Fans of local summer baseball are sure to be intrigued by this book.

Brian Engles grew up in Falmouth before attending Boston University to earn a degree in Film & Television. After a short stint in Hollywood, he returned to the Cape and began writing Young Adult novels. His debut novel Wildball was just published in April of 2018. Its summer baseball backdrop was indeed inspired by the Cape Cod Baseball League whose games Brian has attended his whole life.

Engles recently won a 2018 Falmouth VIPS “Volunteer of the Year Award” for his time as a writing tutor at the Lawrence School and Falmouth High.

Never one to rest, Engles, besides working at Coffee O, and writing, has released three albums of original music with his band Racing Days  He has also produced a short documentary called “Jack’s PACT,” which tells the story of Jack Pearsall, a Falmouth teen who was killed by a drunk driver.

Of course Brian has made time to attend the Commodores games this summer at Guv Fuller Field off Main Street in Falmouth, and we look forward to seeing him at the Library.