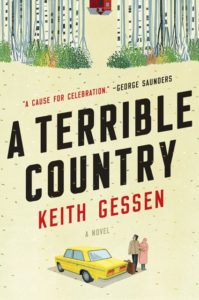 Keith Gessen, who has family ties to Falmouth, will be speaking in Woods Hole as a part of a national book tour introducing his new novel “A Terrible Country.” This is his second book, ten years after his celebrated debut, “All the Sad Young Literary Men.” In the meantime, he has founded the magazine n+1.

Wise, funny, and unforgettably touching, “A Terrible Country” is a literary portrait of modern Russia, which tells the story of Andrei, a young academic living in New York who is called back to Moscow on the eve of the 2008 financial crisis to care for his grandmother. As Andrei endeavors to navigate the illogic and inconvenience of everyday life in Moscow, Gessen gives us a view of a refugee’s return home and what he encounters there, from intricate systems for bribing; to entire outdoor markets that must be moved for a tram; and the high-stakes decisions of Russian grammar.

We see a country whose young people are grappling with the legacy of Soviet Russia, exhausted by the corruption of Putin’s capitalism, and struggling, at a steep personal cost, to create a better future. Some are working the corrupt system for personal profit. Others want a revolution, but they are reminded of a previous revolution’s violent end. “After all,” they are told, “That’s been tried in this country.”

Eight Cousins Book Store will be in attendance, offering Mr. Gessen’s book for sale. He, of course, will be happy to autograph the copies. For more information, call the Library at 508-548-8961 or visit www.woodsholepubliclibrary.org.