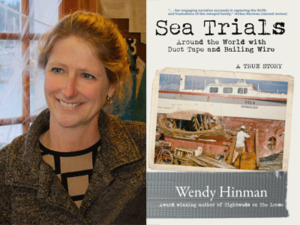 Author Wendy Hinman returns to the Woods Hole Public Library on Wednesday, June 20th at 7:30. Several years ago she came to the Library with her book “Tightwads on the Loose: A Seven Year Pacific Odyssey” which featured the exciting story of her husband and herself sailing around the Pacific “on the cheap” for seven years aboard their 31-foot wooden boat.

She returns with her new book “Sea Trials: Around the World with Duct Tape and Bailing Wire” which also tells a true story of a sea adventure, this one about her husband’s family. In 1973, the Wilcox family set off to sail around the world aboard their 40-foot sailboat, Vela. Thirteen months later, they were shipwrecked on a coral reef, with surf tearing a huge hole in the side of their boat.

After years invested in saving money, preparing the boat, and learning to navigate by the stars, parents Chuck and Dawn refused to give up. Fourteen-year-old Garth was determined to continue, while eleven-year-old Linda never wanted to go in the first place. Can they overcome the emotional, physical and financial challenges to transform from castaways into circumnavigators?

To triumph, these pioneers had to rebuild their boat on a remote Pacific island. Damage sustained on the reef and a lack of resources haunted them the rest of the way around the world as they faced daunting obstacles, including wild weather, pirates, gun boats, mines and thieves plus pesky bureaucrats and cockroaches as stubborn as the family. Without a working engine and no way to communicate with the outside world, they struggled to reach home before their broken rig comes crashing down and they run out of food on a trial that tests them to their limits.

Told with the same sense of humor and “make do” attitude, readers will find this tale entertaining, gripping, and probably make them happy that they are safe at home. They will learn that the Wilcox family strongly believed that a sense of humor is more important than what most would consider “necessities.”