Twenty-one cellists, all students of Nikki Patton at the Chappaquoit Cello Studio, will perform at the Woods Hole Public Library on Saturday, April 6, at 7 PM.

The cellists, who range in age from early elementary school through high school, will perform works by Bach, Purcell, MacDowell, Telemann, Burswold, Lee, Critelli, and Kummer as solos and in duos and quartets.

This is the second benefit concert for the Woods Hole Public Library that the Chappaquoit Cellists have performed. “We appreciate the opportunity to give the gift of music to the community,” said Nikki Patton. “These concerts help to open the students’ eyes as to what they can do with their music, where they can perform, and how they can benefit others through their music.”

There will be several solo performances of various movements from Johann Sebastian Bach’s Cello Suites. “The suites are the cellist’s bible,” said Ms. Patton. “They are the core of the cellist’s curriculum and among the most widely performed and best-loved works in the cello repertoire.”

There will also be performances by three different cello quartets and several duos.

Chappaquoit Cello Studios has been offering cello lessons since 1994. Ms. Patton welcomes students of all ages.

Tickets are $15 for adults and $5 for children 18 and under and are available in advance online (https://www.showclix.com/event/the-chappaquoit-cello-studio), at the Library, at Eight Cousins Bookstore in Falmouth, and at the Bank of Woods Hole. They will be available at the door (cash or check) if seats are still available. The concert will run about an hour; families are encouraged to attend. 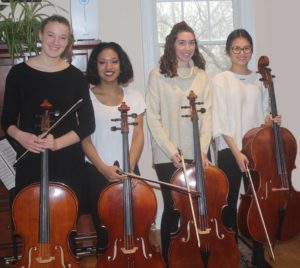 Four of the 21 Chappaquoit Cellists who will perform on April 6 at the Woods Hole Public Library, from left: Ava Warner, Sara Fisichella, Grace Cushing and Celeste Newman. Photo: Nikki Patton