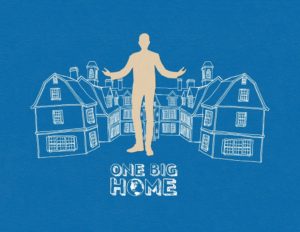 Many people have been dismayed by the appearance of “McMansions” in their towns, but at least one man has done something about it besides grumbling. He is Thomas Bena, of Chilmark on Martha’s Vineyard, and he has created an expose of the new mega-houses going up all along the coast. Most recently the film was mentioned on the mainland in connection with several gigantic new homes being built in Falmouth. Thanks in large part to Mr. Bena’s efforts, the Vineyard now has zoning restrictions on huge homes, and many Falmouth residents hope the same can be done in Falmouth.

Mr. Bena became so distressed about the huge summer houses being built on the island, that he made a film about them. He had no previous experience in film-making, even though he had founded the Martha’s Vineyard Film Festival in 2001. But eventually realizing that making a film was not sufficient to address the issues of the huge houses littering the countryside, he went on and worked to get zoning restrictions placed on the size of homes within his town.

The Woods Hole Public Library is screening Mr. Bena’s film “One Big Home” on Saturday, January 5, at 3 PM, and invites the public to attend. Both Mr. Bena, and Steve Bernier, president of the MV Film Festival Board and one of the film’s executive producers, will be in attendance and available for a question and answer session immediately after the film.

As Mr. Bena has said “I hope my film will spark a discussion about the way we regard housing, land owner-ship, and the economic forces that shape our communities. Rather than throwing up our arms and saying ‘you can’t fight progress,’ communities can stand up for them-selves, their way of life, and the natural environment.”

For further information, people are encouraged to view the film’s website www.OneBigHome.com. Or to view the Vimeo of Mr. Bena’s presentation at a TedX talk. People may of course call the Library for more information at 508-548-8961.