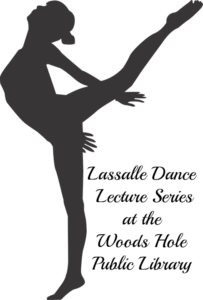 Thanks to life-long Woods Hole summer resident and avid supporter of the dance, Nancy Lassalle, the Woods Hole Public Library will be offering a fifth summer season of lectures about Dance in America. The talks will be held on four Tuesday evenings this summer, starting July 17. All will be held in the lower- level meeting room and will start at 7:30 PM.

As the Library’s director, Margaret McCormick says “We are so lucky and honored that Nancy Lassalle, with all her connections in the world of dance, is helping us with this program.” Thanks to Ms. Lassalle’s generosity the Library is able to offer all these first-class events entirely free and open to the public.

In planning the lectures, the advisors for the dance lecture series chose speakers who will be not only enjoyable, but also educational, expanding the audience’s perception of the wide world of dance, and enabling them to appreciate things on stage which they might not have noticed before.

The first speaker in the series will be Jane Pritchard, curator of dance for the Victoria and Albert Museum, London (V&A). She has authored books about the ballet, served as an archivist for the National Ballet, created the Contemporary Dance Trust Archive, and created several notable exhibits about the ballet which have travelled internationally.  She lectures widely on dance and has made BBC radio programs on the Ballets Russes and the 19th- century composer for dance Georges Jacobi. She has contributed to numerous publications. Her most recent book is Anna Pavlova Twentieth-Century Ballerina.

On July 17, Ms. Pritchard will be speaking about the British choreographer Matthew Bourne.  Mr. Bourne is widely hailed as the UK’s most popular and successful choreographer and director. For 30 years he has been creating and directing dance for musicals, opera, theatre, film as well as his own highly successful, award-winning companies. He is a seven-time Olivier Award winner, and the only British director to have won the Tony Award for both Best Choreographer and Best Director of a Musical. He has been recognized by over 40 international awards, and was knighted by the Queen for Services to Dance. He is now Sir Matthew Christopher Bourne OBE. Ms. Pritchard has titled her talk “Matthew Bourne, Showman.”

This presentation will be followed by Nancy Reynolds speaking on August 7 about “George Balanchine, Life and Legend”. On  August 14 The Wonder Twins, a hip-hop duo will be coming over from The Yard on Martha’s Vineyard, and on August 21 Adam Weinert will be speaking about his dance productions in museums.