Talk: Marine Mammals of the South Atlantic and Aquaculture issues in Patagonia 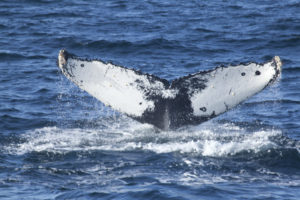 Rafaela Landea, a scientist with MERI, the Melimoyu Ecosystem Research Institute in Chile, which focuses on marine ecosystem conservation in Chilean Patagonia, is visiting friends and colleagues at the Woods Hole Oceanographic Institution (WHOI.) While in town, she will speak about her specialties “Marine Mammals of the South Atlantic and Aquaculture Issues in Patagonia” at the Woods Hole Public Library on Wednesday, November 29 at 7:30 PM.

Her interest in marine conservation and undergraduate work in ecotourism brought her to Patagonia and resulted in the creation and implementation of the foundation of the Melimoyu Ecosystem Research Institute (MERI) in 2011. She tells us “ One of MERI’s primary lines of work is on the endangered Blue Whales (Balaenoptera musculus).  The research work is carried out in partnership with Woods Hole Oceanographic Institution, which has so far has resulted in three publications about passive acoustic monitoring.”

Rafaela has recently received a Master’s degree in Environmental Management at the University of Queensland in Australia in Conservation & Natural Resource Management. Her thesis assessed threats caused by marine aquaculture to the habitats of Blue Whales in Patagonia’s Chiloense Marine Ecoregion. The focus of this research is mapping current and future habitat risks to this globally significant and threatened marine habitat.

This event is being sponsored by her friend Alex Bocconcelli, a WHOI marine mammal specialist, who feels very strongly that scientists should bring their research to the public. He has long been a borrower and patron of the Library, where he has given several talks about his research in the Mediterranean and in Patagonia. His talks have been so well received, he is sure that audiences will also enjoy and be informed by Rafaela’s talk, amply illustrated with beautiful photographs of Patagonia.

This event is free and open to the public.