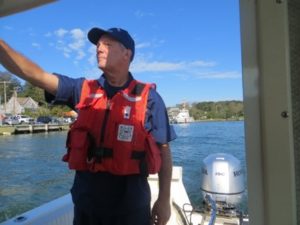 There are many ways that recreational boaters can protect the safety of our marine environment. All are invited to come learn about what they can do to help prevent pollution, discourage invasive species, and increase the security of our waters, ports and oceans.

Members of the Woods Hole Coast Guard Auxiliary Flotilla will talk at the Woods Hole Public Library on Monday, June 18 at 7:30 PM about pollution, environmental protection laws, local aquatic invasive species, and the America’s Waterways Watch program, which asks recreational boaters to take an active role in staying alert for suspicious activity on the waterfront. Auxiliary members will also be available to answer questions about boating rules and regulations.

The U.S Coast Guard Auxiliary was established by Congress in 1939 as the uniformed, volunteer component of U.S. Coast Guard (USCG), under the Department of Homeland Security. It supports all U.S. Coast Guard missions, except roles that require direct law enforcement or military engagement. There are approximately 30,000 members nationwide who dedicate 3.8 million hours of service annually, while conducting 500,000 missions, save approximately 500 lives, assist 15,000 distressed boaters, conduct 150,000 vessel safety checks on recreational vessels and provide recreational boating safety instruction to over 500,000 students.

The three who will be presenting at the Library, though all affiliated with Flotilla 11-02, come from diverse backgrounds. The main speaker is Emmett Krupczak, originally from Lake Michigan. Emmett first encountered the Coast Guard Auxiliary there as a kid while attending an educational event which included instructions to swim sideways to escape a rip current. “My younger sister and I had a scary experience getting caught in a rip current. It was that piece of information stuck in my head that allowed us to get out. That cemented the Coast Guard in my mind as something I wanted to be part of.” Emmett continues the story “I joined the Coast Guard Auxiliary in July 2009, in Boston, while I was a college student. I then served in Michigan for several years and Chicago for a year before transferring up to Woods Hole recently. In Michigan, I was an instructor and Public Education Officer. This will be my first summer with the Auxiliary in Woods Hole; I am very excited to be here! I am currently boat crew and the Woods Hole Flotilla’s Marine Safety Officer.” After graduating from MIT with a degree in physics, Emmett worked as a staff member on a neutrino detector and then as an algorithmic trader, then joined the Applied Ocean Physics and Engineering department at WHOI as a Research Assistant II, serving as a scientific diver and programmer studying coastal dynamics, specifically nearshore currents.

Russ Gasdia and Rachel Anderson will be helping out with the presentation. Russ grew up summering in
Pocassett and spending the majority of his time sailing, power boating and fishing on Buzzards Bay. He explains his attraction to the auxiliary: “My love of the water, along with the fact that three of my uncles served in the US Coast Guard during WWII and my father was a Commissioned Officer in the US Public Health Service following graduation from Massachusetts College of Pharmacy, all played a role in my desire to serve my country in a way I could fit into my personal and professional life. After years volunteering in a variety of efforts in support of my two sons, such as Cub and Boy Scouts, and Little League, I joined the US Coast Guard Auxiliary as a way to continue my volunteering efforts and serve my country and fellow recreational boaters.”

By contrast, Rachel Anderson is the only one of the three speakers serving as a professional Coasts Guard employee. However, her career has seen her serving for 12 years as a clothing designer for the military uniform program out of Washington DC. Prior to that she worked as a clothing designer for the Army. But as she says “I have always wanted to work directly with the Coast Guard to be more involved in operations.” Finally she joined the Coast Guard Auxiliary in January of 2017 and became a member of the Woods Hole flotilla this past November, and is looking forward to getting out on the water in the coming months.