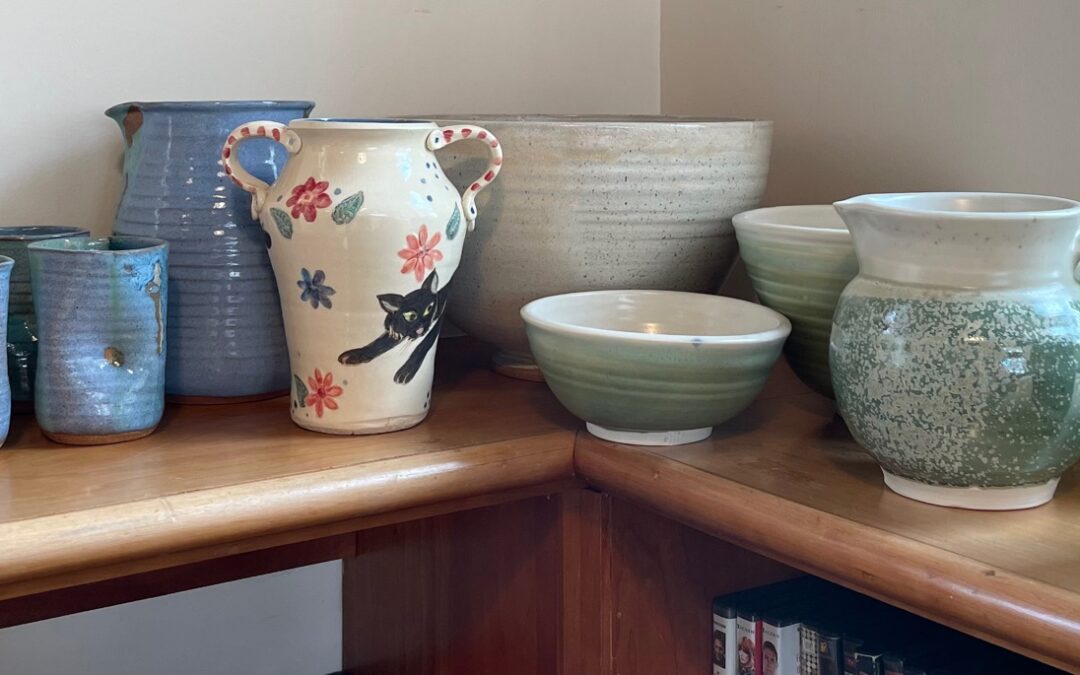 For about fifteen years, the Woods Hole Public Library has been fortunate to receive pottery from their favorite local potters to raffle in an effort to raise funds for the Library’s operations. The Library is grateful to these people who eke out a living with their craft, yet are generous enough to share in this way. The public eagerly awaits this opportunity to win a piece of local art, and simultaneously support their local library.

This year the featured potters are Ann Newbury, Susan Nowogrodzki, Anne Halpin, Tessa Morgan, as well as former potter, now wood carver, Ron Geering. All are avid users and supporters of the Library.  Considering the geographical  closeness of their studios, the craftsmen’s styles are surprisingly different.

Ann Newbury’s work is strong, traditional, functional, and beautiful. She has been extremely generous in her donation this year: not only a large sturdy speckled white bowl which invites the owner to hold it or put dough to rise in it, but also a set of four pinch-cups with an overlaid wash of blue and aqua glaze and a matching large pitcher.

Anne Halpin’s pieces are also traditional, with a graceful touch. She always uses a porcelain clay, and often uses a layering of glazes that produce a celadon-tone. This year she has brought us a generous gift, right out of her kiln, all in her signature green glaze. The first part is a matching set of three nesting bowls,  beautiful and functional. Her other donation is a delightfully chubby pitcher fired at a high temperature, which produced a very interesting “popped” effect.

Susan Nowogrodzki, the “new kid on the block” has donated a double-handled vase decorated with a portrait of a cat.

Tessa specializes in “sgraffito,” in which she creates an image by carving away the surrounding surface, leaving it unglazed. Most of her pieces are adorned with whimsical sea creatures, and her donation this year is a large mug with a whale swimming around the outside, glazed on the inside in a deep sea blue.

After years of donating his traditional pottery, Ron Geering has turned to a new medium, wood, and this year offers a section of a birch trunk with a face (of a tree gnome? A self-portrait?)  carved into it.

All the pottery is on view at the Library near the circulation desk.

Tickets for the raffle, which are $ 2 for one ticket and $ 5 for three tickets, are available at the Library at 581 Woods Hole Road. Drawing of the  winning tickets will be held by mid-December, so be sure to buy your raffle tickets way before that.

The Library encourages the public to visit these generous artists at their studios, and support them, just as the potters have done for the Library.